Travels Across the Roof of the World: A Himalayan Memoir

TRAVELS ACROSS THE ROOF OF THE WORLD provides a sweeping yet intimate view of the breathtaking peaks, splendid valleys, and extraordinary people of this vast region, from the Pamir Mountains in Kyrgyzstan, through Afghanistan’s fabled Hindu Kush, the Karakoram in Pakistan, and the Great Himalaya Range that stretches across northern India, Nepal, Tibet, and Bhutan.

Unique in scope among photo books on the Himalaya, TRAVELS ACROSS THE ROOF OF THE WORLD chronicles William and Anne Frej’s more than twenty pilgrimages throughout the area spanning 40 years and 3,000-miles through some of the world’s most remote and difficult-to-reach country. Inspired by the devotion to the practice of Tibetan Buddhism they encountered in the villagers they met on their first trek to Nepal in 1981, they set out on a quest to document Asia’s highest peaks as well as the lives of the resilient people living in these remote mountain fastnesses.

When they began, trekkers from the West through these regions were few. Even now, the trips are demanding––but not nearly as harsh as the daily lives of the residents, who continue to exist in a kind of stunning isolation that has allowed them to maintain the rich cultural traditions and spiritual practices that have sustained them over many centuries. Edwin Bernbaum’s essay rounds out the picture, with its focus on the symbolism, religious importance, and associated legends of these sacred places.

William Frej has been photographing indigenous people for over forty years, while living in Indonesia, Poland, Kazakhstan, and Afghanistan, as well as other remote, mountainous regions of Asia as a career diplomat with the United States Agency for International Development (USAID). His first two books, Maya Ruins Revisited: In the Footsteps of Teobert Maler (Peyton Wright Gallery Press 2020), have won more than a dozen awards between them (see their listings elsewhere on this website). His work has been shown at the San Francisco Arts Center, San Francisco International Arts Festival, Galeria La Eskalera in Mérida, Mexico, and Peyton Wright Gallery, Peters Projects/Gerald Peters Contemporary, and Museum of Spanish Colonial Art in Santa Fe, New Mexico. His images are in the Duke, Notre Dame, Stanford, University of California, Berkeley, University of New Mexico, and Yale. His photographs of Africa, the Himalaya, and India are featured in Sacred Mountains of the World, by Edwin Bernbaum (Cambridge University Press, 2022).

Anne Frej is a retired urban planner who focused on feasibility studies and design concepts for commercial real estate projects in the U.S., Indonesia, Central Europe, and Central Asia. At the Urban Land Institute (ULI) in Washington, D.C., she was the project director and primary contributor to four books published by the Institute. She also served as the Asia editor of Urban Land, a monthly magazine published by ULI. At the U.S. Embassy in Kabul, Afghanistan, she was as a cultural-resources planner responsible for community-outreach programs and cultural-heritage activities. She was a contributor to Trekking in Nepal, West Tibet and Bhutan, by Hugh Swift (Sierra Club Books 1989).

Edwin Bernbaum, Ph.D., is a mountaineer and scholar of comparative religion and mythology. He is the author of Sacred Mountains of the World, 2nd edition (Cambridge University Press 2022), the first edition of which won the Commonwealth Club of California’s gold medal for best work of nonfiction, and The Way to Shambala: A Search for the Mythical Kingdom Beyond the Himalayas (Shambala 2001), a study of Tibetan myths and legends of hidden valleys and their symbolism. He is featured in “Beyond the Mountaintops: Extraordinary Mountaineers, Extraordinary People,” an exhibit at the American Mountaineering Museum on eight climbers who have pioneered advances in climbing and humankind. Currently he is Co-Chair of the International Union for the Conservation of Nature (IUCN) Group on the Cultural and Spiritual Values of Protected Areas (CVSPA) and Senior Fellow at the Instituto de Montaña, which helps Andean communities become more resilient as they adapt to climate change.

Jane Gray Morrison is an ecologist, author, and filmmaker who currently serves as the executive vice president of the Dancing Star Foundation (dancingstarfoundation.org), a non-profit organization focused on international biodiversity conservation, global environmental education, and animal protection. Her most recent books are On the Nature of Ecological Paradox (Springer, 2021), with Michael Tobias, and Bhutan: Conservation and Environmental Protection in the Himalayas (Springer, 2021) with Michael Tobias and Ugyen Tshewang, former secretary of Bhutan’s National Environment Commission.

Michael Tobias, Ph.D, is a global ecologist, author, and filmmaker who currently is president of the Dancing Star Foundation (dancingstarfoundation.org). The author of some sixty books of non-fiction and fiction, and the writer/director/producer of more than 100 films, Tobias did much of his Ph.D research in Ladakh, India, and has explored mountain ranges on every continent. He received the Courage of Conscience Award in 1996, an honor also bestowed on His Holiness the 14th Dalai Lama and Mikhail Gorbachev, among others, and the 2004 Parabola Magazine Focus Award. 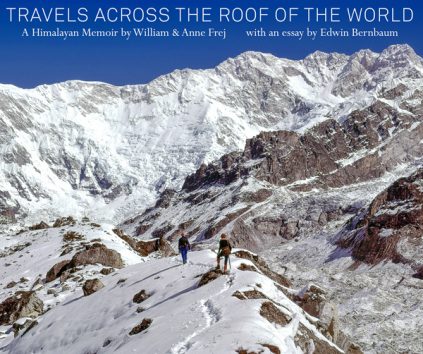 “In the vertical world of the Himalaya, it is hard to say which is more seductive: the stupendously stern and spacious land or the layer upon layer of deep-time culture, so rich in color, diversity, and sinewy strength. Bill and Anne Frej explore both of these dimensions in their opulent book, Travels Across the Roof of the World, which will lift you out of your armchair and send you looking for your trekking boots.”
–William deBuys, author of The Trail to Kanjiroba: Rediscovering Earth in an Age of Loss, and The Last Unicorn: The Search for Earth’s Rarest Creature

“William Frej’s enticingly sharp and magnificent photographs of the Himalayan landscape present pristine white ice-mountain walls, deep blue skies, and earthen, wood, and stone villages unblemished by the accouterments of modernity. Taken over the past four decades, these images provide a powerful and important record of the Himalayas long before motor roads cut deep scars into the mountainsides where he and his wife trekked, and large groups of explorers and climbers started leaving behind acres of trash. Frej’s evocative photographs of the Himalayan people he encountered also seem from another era—and indeed, many of them are–reminding the viewer of Roland Michaud’s or Eric Valli’s portraits: romantic and crisp like the landscapes they inhabit.”
–Kevin Bubriski, photographer and author of Kailash Yatra, with Abhimanyu Pandey, Mustang in Black and White, Nepal, 1975-2011, with Sienna Craig.