Seasons of Ceremonies: Rites and Rituals in Mexico and Guatemala

“"Seasons of Ceremonies is an extraordinary aesthetic and ethnographic accomplishment. The book brings readers inside syncretic Mexican and Guatemalan ceremonies that are rarely witnessed by outsiders. William Frej’s haunting, insightful, black-and-white photographs are the centerpiece, documenting rituals but also the motion and emotion inherent to collective religious expression. The photographs resonate mutually with essays and introductory notes that provide regional, temporal, cultural, and historical context. The composite of these interacting texts and images is an unusually versatile and compelling work that is equally appropriate on coffee tables, in public libraries, and in academic collections."”

“This remarkable collection of photographs and scholarship brings together the mystical with the visual in a mesmerizing blend. In Frej’s skilled hands, the magic of photography and of Mesoamerican ritual conspire to transport the reader, not with voyeuristic diversion but with dreamlike captivation.
The essays add a dimension that presents the same intertwining of fact and mystery. As the pithy writings make amply clear, the transcendent practices represented are deeply rooted in the earth and express a powerful syncretism of Indigenous animism and Catholicism. The words and images together vividly demonstrate the purpose of the ritual performances: to give meaning to a world that often presents chaos and uncertainty. What a powerful concept for our times.”
—Don J. Usner, photographer and author of Sabino’s Map: Life in Chimayó’s Old Plaza, Chasing Dichos Through Chimayó, and, with William deBuys, Valles Caldera: A Vision for New Mexico’s National Preserve.

William Frej began his career as an architect. He later served as a career diplomat with the Agency for International Development, living in Nepal, India, Indonesia, Poland, Kazakhstan, Afghanistan and, most recently, Mexico, over a period of thirty-four years. Always with his camera at his side, he has been photographing Indigenous people and their environments since the 1970s, documenting the changing lifestyles and architecture of many of the world’s unique and ancient cultures. He lives in Santa Fe. 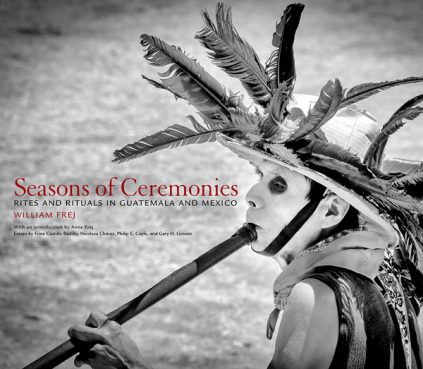