The Other World: Animal Portraits

““Extraordinary . . . epoch-making in the sense that it challenges human exceptionalism by portraying animals in a way that had only been reserved to humans so far, and in a historical sense, only to privileged humans. Peasants, like animals, were always portrayed in a "context" (Bruegel and Millet come to mind, among others) but individuals of social rank could also be portrayed in isolation because they are deemed to be singular or unique. Attributing this quality to animals is an unprecedented step towards defining an environment of interbeing, so to speak, and Wilson does it with captivating dignity and grace.””

This stunning new collection of photographs by Brad Wilson is inspired by the notion of the “authentic encounter,” that is, allowing the animal to reveal itself to us rather than imposing our subjective notions on it or on the picture.

Wilson works in cooperation with zoos and wildlife sanctuaries who bring the animals into the studio, where he photographs them against a black background. This makes the animals appear grounded and three-dimensional—magnificent, approachable, yet inherently mysterious. He describes the situation as a kind of “controlled chaos,” but in the end it allows him to create images that show each animal as an individual being with its own personality and dignity. There is no whiff of anthropomorphism here but rather a wise and respectful approach to these creatures with whom we share the Earth.

As Wilson says, “In each animal’s gaze we see a part of ourselves and catch a fleeting glimpse of another world, a world we once fully inhabited. In many ways they are what we used to be, and like us, they deserve to follow their own unique path into the future, wherever it may lead them. Their fate is fundamentally tied to our own and we must realize that our ascendency can no longer continue at their. Conservation is now vitally important, not just to save animals, but to save ourselves.”

Brad Wilson is a fine art and commercial photographer whose images have appeared around the world in advertising campaigns, annual reports, music packages, and in media ranging from CBS News to Audubon. His fine-art photographs have been shown in museums, galleries, and fairs in London, Paris, New York, Brussels, Copenhagen, Moscow, Beijing, Singapore,Tokyo, and Santa Fe. He is currently represented by Doinel Gallery in London, Surround Art Gallery in Moscow, Artistics Gallery in Paris, and PhotoEye Gallery in Santa Fe. Wilson is based in Santa Fe, NM, where he pursues his photography surrounded by the beauty and tranquility of the southwestern deserts.

Dan Flores is the author of ten books, most recently the New York Times bestseller, Coyote America: A Natural and Supernatural History (Basic Books 2016), and American Serengeti: The Last Big Animals of the Great Plains (University Press of Kansas 2016). Pulitzer-winning novelist Annie Proulx has written that “his work ranks with that of Thoreau, William Bartram, Aldo Leopold, John Muir, Peter Matthiessen.” Flores’s essays on the environment, art, and culture of the West have appeared in The New York Times, the Los Angeles Times, and the Chicago Tribune, as well as in Texas Monthly, Orion, Wild West, and Southwest Art. Flores is A. B. Hammond Professor Emeritus of the History of the American West at the University of Montana-Missoula. He lives outside Santa Fe, New Mexico. 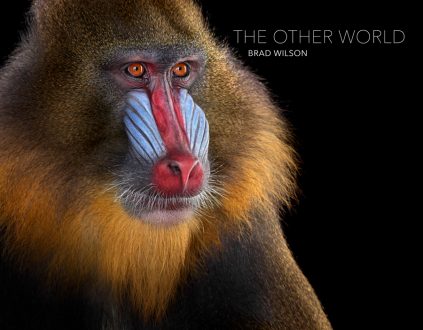 “Wilson’s images peel back layers of filtering in our minds, so that we marvel even more at the stunning creatures before us. We are used to seeing them embedded in their habitat, really as part of their habitat, not singly, not as individuals. So, with this treatment, we get a lion’s eye view of a lion. And a giraffe’s of a giraffe. It is like “Richard Avedon does animals.” And it probably takes us closer than we’ve been before to how wild creatures actually see each other.”
—William deBuys, author of The Trail to Kanjiroba: Rediscovering Earth in an Age of Loss, and The Last Unicorn: The Search for Earth’s Rarest Creature

“If the eyes of the primates in the photos seem lit from within by a spirit that speaks directly to you, it’s not just your imagination at work. These are family portraits, after all; monkeys and great apes have 90 to 98 percent of the same genes that build the human primate. The other animals portrayed are more distant relatives. Yet all of them share a majority of their genes with us as well. There is much wonder in this kinship, and there is real magic in the form and beauty of each creature itself. Brad Wilson offers the proof on every page.”
—Douglas H. Chadwick, author of Four-Fifths a Grizzly: A New Perspective on Nature that Just Might Save Us All 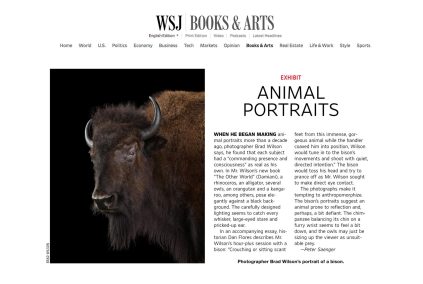