Maya Ruins Revisited: In the Footsteps of Teobert Maler

“"This stunning, large format book is a collection of black and white photographs of Maya ruins in the Yucatan Peninsula of Mexico and Guatemala. ... These photographs are not just works of art, but important scientific documentation of a civilization that is deteriorating due to the harsh environment and the ravages of looters."”

“Maya Ruins Revisited: In the Footsteps of Teobert Maler, by William Frej, is a truly outstanding and magnificent book, on many levels. In the late nineteenth and early twentieth century, a remarkable photographer named Teobert Maler explored large areas of Guatemala and the Yucatán, discovering hundreds of unknown Maya temples and cities and photographing what he found. These photographs were not only extraordinary for their artistic brilliance, but they created an important record of what these Maya ruins looked like unrestored and unexcavated, still buried in jungle growth. Now, over a century later, William Frej has retraced the explorations of Maler and photographed many of his sites, often from the same vantage points. The result is a gorgeous and haunting book of photography, exploration, history, and adventure, enriched by essays from several well-known Maya scholars. While some of these Maya sites have been cleared, many remain untouched, remote, and almost unknown, visited only by Maya beekeepers. I highly recommend this fascinating and beautiful volume, which is sure to become a classic.”
–Douglas Preston, #1 New York Times bestselling author of The Lost City of the Monkey God

“If you read only one work of art about explorer-photographers of Pre-Columbian Maya ruins, my advice is to make it this extraordinary compilation. This is much more than a rephotography book. Yes, it compares William Frej’s glorious contemporary images of remote ruins alongside the late nineteenth-century images of archaeologist-adventurer Teobert Maler, but the aesthetic pleasures are augmented by detailed knowledge with beautifully written, informative captions and current scholarship. Best of all, you can travel from your armchair through history and don’t have to brave the jungle heat, snakes, and insects.”
–MaLin Wilson-Powell, former assistant to Beaumont Newhall, former curator at the New Mexico Museum of Art, Santa Fe, the McNay Art Museum, San Antonio, Texas, and former director of The Raymond Jonson Gallery at the University of New Mexico.

This stunning, substantial volume documents William Frej’s forty-five year search for remote Maya sites primarily in Guatemala and Mexico, inspired in large part by his discovery of the work of German-Austrian explorer Teobert Maler, who photographed them in the late nineteenth and early twentieth centuries. Many of Frej’s magnificent photographs are juxtaposed here with historic photographs taken by Maler, and reveal the changes in the landscape that have occurred in the intervening century.

This unique pairing of archival material with current imagery of the same locations will be a significant addition to the literature on this ancient civilization that continues to captivate scholars and general readers alike. The book provides extended captions for all of the photographs, including their historical context in relation to Maler’s images, which are archived at the Peabody Museum of Archaeology and Ethnology at Harvard University, the Ibero-American Institute in Berlin, Brigham Young University, the University of New Mexico, and the Getty Museum in Los Angeles.

The author’s introduction covers the challenges of finding and photographing remote Maya sites. Alma Durán-Merk and Stephan Merk contribute a biographical sketch of Teobert Maler, while Khristaan Villela addresses the historic role of photography as a tool for documenting and presenting the history of significant Maya sites. Jeremy Sabloff provides essential background on the Maya and their built environment, and a chronology of the principal periods of Maya culture. The book includes a listing of all the sites featured and their locations as well as two maps.

With 160 dutone and triton images, Maya Ruins Revisited offers an engaging and stimulating visual journey to many remote and seldom-seen Maya sites. It will serve as valuable documentation of places that are rapidly being overcome by forces of nature and man.

William Frej has spent decades photographing remote cultures around the world while living in Indonesia, Poland, Kazakhstan, and Afghanistan, as well as other remote, mountainous regions of Asia. He has visited over 180 Maya archaeological sites in Mexico and Guatemala, over half of which were first photographed by Teobert Maler. His work has been featured in a number of venues in the United States and Mexico.

Alma Durán-Merk has published extensively in the field of migration ethno-history. Her books include In Our Sphere of Life: German-Speaking Immigrants in Yucatán and their Descendants, 1876-1914, and Villa Carlota: German Settlements in Yucatán, 1864-1897.

Stephan Merk is considered one of the foremost experts on Teobert Maler. He has written two books about Maya Puuc architecture, and has served as a co-editor of Mexicon – Journal of Mesoamerican Studies since 1998.

Khristaan D. Villela is the Director of the Museum of International Folk Art, Santa Fe, New Mexico. He specializes in the history of Pre-Columbian and Latin American art and on the reception of ancient American culture in the modern world, and is the author, most recently, of Ancient Civilizations of the Americas: Man, Nature, and Spirit in Pre-Columbian Art (Miho Museum, 2011).

Jeremy A. Sabloff is an archaeologist with a specialty in ancient Maya civilization. He is an external professor and past president of the Santa Fe Institute and the Christopher H. Browne Distinguished Professor of Anthropology, Emeritus, at the University of Pennsylvania. He is the author or co-author of ten books and monographs, as well as the editor or co-editor of fourteen books. 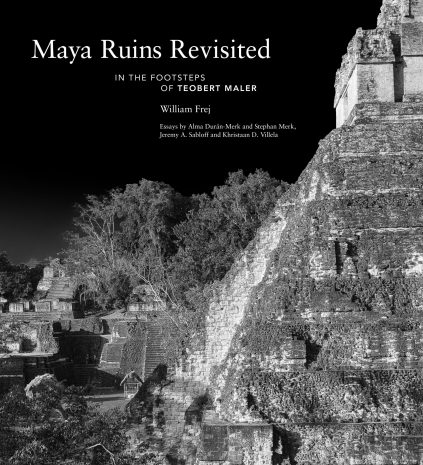 Interview with William Frej in the Roswell Daily Record 2022