A Country No More:
Rediscovering the Landscapes of John James Audubon

In 2010, when photographer Krista Elrick began traversing John James Audubon country in search of the birds the nineteenth-century American naturalist observed, painted, and wrote about, she encountered scarcely a sighting. Instead, she found the lushly forested watersheds and waterways that Audubon had passionately described in his journals vastly altered with many of the bird species extinct, their supporting habitat all but disappeared. Industrial buildings, parking lots, and strip malls had overtaken much of the area, edging out the natural world.

Vintage Hasselblad film camera in hand, she traveled for 10 years and over 45,000 miles as she sought clues to what had happened to these places and to the animals––and peoples––that had once lived there. Starting in Mill Grove, near Philadelphia, she retraced Audubon’s journeys to the bluffs of Cincinnati overlooking the Ohio River, to Henderson, Kentucky, to the confluence of the Ohio and Mississippi Rivers, to Natchez, Mississippi, St. Francisville and New Orleans, Louisiana, to Charleston, South Carolina, to St. Augustine and Key West, Florida, to the confluence of the Missouri and Yellowstone Rivers, and, finally, to Audubon’s gravesite in the Trinity Church Cemetery in New York City.

She responded to his paintings of birds that had been constructed with backdrops from a variety of locales by creating collages of her own black-and-white images of the regions she traveled through. She pored over historic bank notes, period maps, and other ephemera that yielded fascinating insights into the changes and the resulting effects on the natural world and its species, as well as on the lives of the Native American and African American populations that had occupied the areas.

In her research she also discovered that Audubon himself was something of an enigma, a fabulist who told conflicting stories about his own history and identity. The result is a fascinating compendium that gives us a fresh and provocative perspective on Audubon, the man, his times, and his legacy.

Krista Elrick has been an exhibiting artist and activist for more than three decades. A Country No More: Rediscovering the Landscapes of John James Audubon is her first solo book. Several of the collages she created for this project were featured in a solo exhibition entitled “Retracing Audubon,” at Northlight Gallery in Tempe, Arizona, in 2019, and will be the focus of a solo show at the Turchin Gallery at Appalachian State University in Boone, North Carolina, which opens in 2021. Elrick’s work has appeared in other books including Imagine a City that Remembers: The Albuquerque Rephotographic Project, by Anthony Anella and Mark Childs (University of New Mexico Press, 2018); Grasslands / Separating Species, with photographs by Dana Fritz, David Taylor, Jo Whaley and Michael Berman, and essays by Mary Anne Redding, William deBuys, and Rebecca Solnit (Radius Books 2010), and which was published in conjunction with an exhibition at 516 ARTS in Albuquerque; and Through the Lens Creating Santa Fe (Museum of New Mexico Press 2009), which she co-edited with Mary Anne Redding. Elrick lives in Santa Fe, New Mexico. 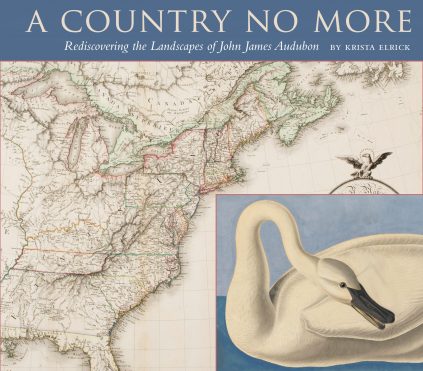 “In her decade-long project following the path of renowned artist and naturalist John James Audubon, Krista Elrick found rivers and wetlands scarred and shaped by humans, their waters polluted and dominated by commerce. . . Elrick is a landscape photographer, traditionally a male-dominated genre. Troubling the canon with her gender and her composited prints, she depicts overlapping images that remind the viewer they are looking at a constructed landscape. Not the kinds of pictures we are used to seeing in Arizona Highways. Her images reference a regular pattern of the frame and then defy it, the edge of one image at times leaving a distinct line dissecting the sky of the one laid below it, tree limbs nearly line up, and rivers are disrupted, urging the viewer to question their meaning.

“The waterways are evidence to a dynamic history that engaged European settlers like Audubon, Africans brought to the New World as slaves, and Native Americans. Often in conflict and always for/against the natural bounty. As their descendants we now see a way forward in much-changed ecosystems. We can look back with an awareness that recognizes the varied perspectives; and redefine overlapping histories. Not as divergent or disparate but, as American and contributing to our strength and continuing struggles for equity and reconciliation.”