THE JUNGLE AT THE DOOR: A Glimpse of Wild India

THE JUNGLE AT THE DOOR: A Glimpse of Wild India
By Joan Myers With an Essay by William deBuys George F. Thompson Publishing November 2012

“At once familiar and a revelation, immediate and distant, Joan Myers' photographs show a world in which the great beasts and humans, nature and the gods still co-exist, but William de Buys' passionate and prophetic words warn of the velocity with which that fragile coexistence is being reduced to urban myth.”

The Jungle at the Door is inspired by Joan Myers’s encounters with jungles and animals in remote areas of India, and by Kipling’s Just So Stories, which she read, as many of us did, as a child. The Jungle at the Door is her homage both to that book and to the wild parts of India  that few travelers ever see, much less know about, and which are rapidly vanishing in the face of increasing development and industrialization.

Joan Myers has been taking photographs for more than thirty years, exploring the relationships between people and the land. Her highly acclaimed work has been the focus of three Smithsonian exhibitions, numerous solo and group shows, and six books.

They include Wondrous Cold: An Antarctic Journey (with text by Sandra Blakeslee), which was published by Smithsonian Books/HarperCollins, and awarded Honorable Mention in the American Association of Museums’ 2006 Publication Competition. Salt Dreams: Land and Water in Low-down California (with text by William deBuys), won the 1999 Western States Book Award for Creative Non-Fiction, and the 1999 William P. Clements Prize for the best Non-Fiction Book on Southwestern America; it was published by the University of New Mexico Press.  Her current work centers on volcanic and geothermal sites around the world.

“Through the miracle of photography and the beholding eye of a master photographer such as Myers, we are able to experience the land and life in India’s last remaining wild jungles. This is the land of the tiger and elephant and monkey and rhino and a treasure trove of other species. But, as noted writer William deBuys shares in his provocative essay, poaching is a persistent and pervasive problem, and the natural habitat for wild animals is shrinking at an alarming rate due to expanding development and industrialization. Tigers, for example, are now extinct in ninety-three percent of their historical range worldwide, and, without wildlife refuges such as Bandhavgarh, Kanha, Karizanga, and others in India, their numbers would plummet further.
Few citizens of the world will ever experience firsthand the jungles and wild places of India, but in Myers’s visual discovery they can witness the excitement and energy of coming upon wild game in a moment’s notice and experiencing religious shrines and rural life in nearby villages that seem to blend in effortlessly with the adjacent wilderness.
Jungle at the Door is that rare glimpse into another world, a world that depends not only on human awareness of what is lost when the jungle is gone, but also the courage and foresight to preserve remaining wild places everywhere, from those in India to our own home ground.
Off the beaten track in the backwaters and jungles of India – like watching a film documentary. Stunning photographs…”
-Books Monthly UK 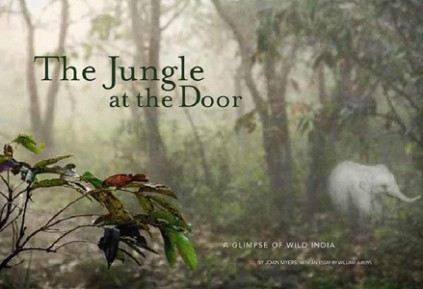