Imagine setting out on a road trip in a 1929 Ford Model A Roadster, with the stated goal of traveling from Manhattan to Mexico and Central America, after only a week’s worth of preparation. This is exactly what brothers Arthur Lyon (age 25) and Joe Lyon, Jr. (age 21) did on March 23, 1930. They prepared for the trip by purchasing camping gear, studying maps, gathering information about the areas they planned to traverse, getting their passports and credentials in order, mounted in the car’s rear seat a fifty-five-gallon oil drum equipped with a gas feed for extra fuel, and divided up the princely sum of $324 in cash to fund their sojourn. As for their Spanish? Muy poco (very little).

The story is replete with movie-like accounts of what the young men faced on their epic journey, including encounters with expatriates, government and military officials, and other characters. In Mexico, where they faced nearly impassible roads, they finally had the car fitted with extra railroad wheels so they could literally ride the rails south. The brothers’ 4,562-mile trip ended on May 17, 1930, their fifty-fourth day on the road, after the car suffered mechanical problems and the brothers and car nearly met their fate in the form of an oncoming freight train. Arthur and Joe returned to the U.S. separately, in part by tramp steamer.

The amazing 1930 journey of the young Lyon brothers—the first-ever transnational trip by car in North America—can be seen as the centerpiece of a larger story, of a pair of lives lived out not just as brothers but as partners who sought adventure and careers in the new Automobile Age. To help understand the forces that shaped those lives, the brothers’ nephew, Larry Lyon, provides an introduction that chronicles the family’s rich history, from a family-owned grist mill in southern Missouri to the small mining towns of Pearl, Idaho, and National, Nevada, to their father’s innovative auto-repair business in McDermott, Nevada, the brothers’ founding of Nevada’s first bus company their investment in oil and gas exploration, and many other business ventures.

Denis Wood, the renowned geographer, provides annotations to the brothers’ journey, highlighting geographic, historical, and current events of the time in the U.S., Mexico, and Central America. In the conclusion, Sally Denton, prize-winning investigative journalist and author, reminds us of how truly unique was the brothers’ journey and how it represents Americans’ true longing for exploration and adventure. Readers will no doubt appreciate the story as typifying some of the best of our unique American character.

Larry Lyon was born in 1947 in Reno, Nevada, and grew up in Reno and Boulder City, Nevada. He completed his B.A. in psychology at the University of Nevada, Las Vegas, and M.S. in experimental psychology and Ph.D. in clinical psychology, both at Washington State University. Since 1979, he has worked in the mental health field in a variety of settings, including nineteen years in private practice in The Dalles, Oregon. He currently works for the Veterans Health Administration in Las Vegas. He resides in Boulder City, Nevada.

Denis Wood was born and raised in Cleveland, Ohio, where he graduated from Western Reserve University with a B.A. in English. He received his M.A. and Ph.D. in geography from Clark University in Worcester, Massachusetts, where he subsequently taught high school. From 1973 until 1996, he taught environmental psychology and design at the College of Design at North Carolina State University, where he was Professor of Design and Landscape Architecture. Author of The Power of Maps (Guilford Press, 1992), he also curated the award-winning Cooper-Hewitt National Museum of Design exhibition of the same name (subsequently mounted at the Smithsonian Institution in Washington, D.C.). With Robert J. Beck, he co-authored Home Rules (The Johns Hopkins University Press, in association with the Center for American Places, 1994) about the transmission of culture that occurs in the process of “living a room.” The book was designated one of the top 100 geography books of all time by the Royal Geographical Society. His other book publications include Weaponizing Maps: Indigenous Peoples and Counterinsurgency in the Americas, with Joe Bryan (Guilford Press, 2015), Everything Sings: Maps for a Narrative Atlas (Siglio Press, 2010; Second Edition, 2013), Rethinking the Power of Maps (Guildford Press, 2010), The Natures of Maps: Cartographic Constructions of the Natural World, with John Fels (University of Chicago Press, 2008); Making Maps: A Visual Guide to Map Design for GIS, with John Krygier (Guilford Press, 2005; Second Edition, 2011; Third Edition, 2016); Five Billion Years of Global Change: A History of the Land (Guilford Press, 2004); and Seeing through Maps: The Power of Images to Shape Our World View, with Ward L. Kaiser and Bob Abramms (ODT, 2001; Second Edition, 2005). Wood also exhibits his artwork and lectures widely.

Sally Denton, born in Elko, Nevada, in 1953, is a third-generation Nevadan. She attended the University of Nevada-Reno before completing her B.A. at the University of Colorado in Boulder in 1974. Denton received a Nannan Literary Grant in 2000, Western Heritage Awards in 2002 and 2004, and a John Simon Guggenheim Memorial Foundation Fellowship in General Nonfiction in 2006. In 2008, she was inducted into the Nevada Writers Hall of Fame. Her career as an investigative reporter resulted in articles in The Washington Post, Penthouse, The New York Times, Columbia Journalism Review, and American Heritage. Her books include The Bluegrass Conspiracy: An Inside Story of Power, Greed, Drugs, and Murder, co-authored with Robert Samuel (Doubleday, 1990); The Money and the Power: The Making of Las Vegas and Its Hold on America (Alfred A. Knopf, 2001), which was made into a documentary film broadcast on the History Channel; American Massacre: The Tragedy at Mountain Meadows, September 1857 (Alfred A. Knopf, 2006); Passion and Principle: John and Jessie Frémont, the Couple Whose Power, Politics, and Love Shaped Nineteenth-Century America (Bloomsbury, 2007); The Plots Against the President: FDR, a Nation in Crisis, and the Rise of the American Right (Bloomsbury, 2012); and The Profiteers: Bechtel and the Men Who Built the World (Simon & Schuster, 2016). Denton currently resides in Boulder City, Nevada, and Santa Fe, New Mexico, and her Website is www.sallydenton.com. 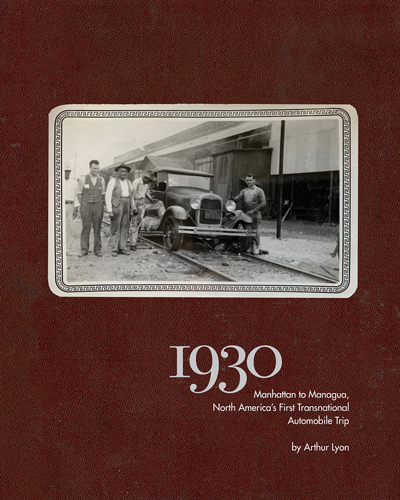 Read a Nevada Public Radio  article and listen to an interview here.

Read an interview with Lyon in the Boulder City Review.

“This tale of unmitigated gumption is recounted in the recently published book: 1930: Manhattan to Managua, North America’s First Transnational Automobile Trip. The book is basically the day-to-day dairy of one of the two brothers, Arthur Lyon.”
—Thomas Mitchell, read the full book review on the 4th St8! blog as well as on the Mesquite Local News.