“"Fire Ghosts is a thoughtful and insightful look at the aftermath of a wildfire. Though we may tend to view such events as “destructive," in reality, wildfires just change the landscape. The photos by Philip Metcalf and Patricia Galagan are a testimony to the rejuvenating powers of Nature. More than that, these stunning images, reminiscent of Ansel Adams’s best work, capture the subtle and special beauty that comes to a forest restored to its simplest elements, and help us all to appreciate the regenerative processes that maintain our ecosystems."”

In the summer of 2011, in the Jemez Mountains of New Mexico, a falling power line sparked a wildfire that burned 158,753 acres of forest. From their home in Santa Fe, 30 air miles southeast, photographers Patricia Galagan and Philip Metcalf watched what came to be known as the Las Conchas fire burn day and night for more than a month.

As soon as the roads reopened, they went to the mountains to see the damage this violent fire had wrought. Taking a trail to the rim of Cochiti Canyon, they passed through sections of forest that had burned so hot nothing remained but blackened trunks and negative spaces where huge tree roots had been. The canyon and the waves of ridges beyond were black with standing dead trees.

The visual chaos of the burned forest, at first daunting, pushed them to look harder, see differently, and, as they did so, the forest began to look beautiful in its highly altered state. For more than seven years they were compelled to make photographs of the aftermath of the fire to draw people beyond the news-cycle images of smoke and flames into the reality of a forest after an extreme fire. FIRE GHOSTS is both their ode to the old forest, and their gift to help us understand that in this era of accelerating climate change and increasingly devastating wildfires all over the world, the new forests will never be the same, but we can still find beauty there.

Patricia Galagan’s photography often concerns the aftermath of upheaval in the landscape. Her work has been shown at Blue Sky Gallery in Portland, Oregon, the New Mexico Museum of Art, in Santa Fe, Fototeca de Cuba in Havana, and Fotografika Gallaery near Geneva, Switzerland, among others.

Philip Metcalf creates black-and-white infrared images of the landscape, most notably in the American Southwest. In 2015, he was an artist-in-residence at Bandelier National Monument in New Mexico with his wife, Patricia Galagan. His work has been shown at the New Mexico Museum of Art and the San Diego Art Institute.

Craig D. Allen is a specialist in system dynamics with the U.S. Geological Survey. William deBuys is a conservationist and author of eight books, including A Great Aridness: Climate Change and the Future of the American Southwest. Katherine Ware is curator of photography at the New Mexico Museum of Fine Art. 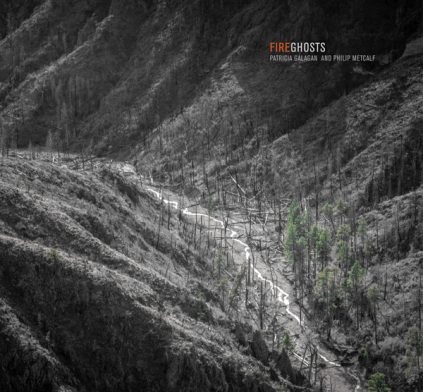 Listen to an interview with Galagan on KSFR Public Radio for Carly Newfeld’s The Last Word.

Thursday, June 25, 2020: Patricia will be in conversation with essayists William deBuys, Craig D. Allen and curator of photography at the New Mexico Museum of Fine Art, Katherine Ware and Ernie Atencio, regional director of National Parks and Conservation association (co-sponsors of the event); events are recorded and archived on their website